More than two months into the U.S. Department of Commerce’s (DOC) moratorium on solar panels shipments to the United States, the Biden regime tacked with the wind due to his dismal approval rating and an economy on life support.

On March 28, the U.S. DOC launched an investigation into the U.S. solar industry. In what was “described as a worst-case scenario for the companies that supply 80 percent of the country’s solar cell imports, with no domestic manufacturing to alleviate the pressure,” according to PV Magazine.

Taking the drastic and destructive step to freeze all manufacturing in Asia, particularly in Covid locked-down China, combined with supply chain bottlenecks overseas, has killed the industry for the small to medium-sized businesses (SMB) photo voltaic (PV) vendors in the United States.

In an article by a trans-Atlantic law firm, Womble-Bond-Dickerson, reads in part:

“On June 6, the Administration declared a 24-month tariff moratorium on solar panels manufactured in Cambodia, Malaysia, Thailand, and Vietnam, by executive action. The moratorium comes in response to serious concerns from the U.S. solar industry about the effects of an ongoing Department of Commerce (DOC) investigation into whether solar panels imported from these nations originated in China and, thus, would be subject to retroactive tariffs of up to 250 percent.

While companies may be subject to tariffs after the 24-month period ends, the moratorium reportedly will exempt U.S. companies from any retroactive tariffs.”

The timing of the “moratorium” on solar panel investigation in March and the “waving” of tariffs this June is more than suspicious.

What better way to destroy the solar panel SMBs and vendors than with a 150-day moratorium due to a politically-motivated investigation? Joe Biden claims he’s looking out for the “little guy” and being tough on Communist China when the world knows he’s in bed with the enemy of the United States of America.

Feeling the political heat, Joe Biden now presents himself as the savior to an industry that is about to implode due to his Commerce Dept. actions. But he threw sand into the gears of solar panel production. As a result, it will take six months for new shipments to arrive in the United States.

Most solar companies will go belly up this summer with no product to sell. With revenue being disrupted or gutted completely, a substantial portion of the 230,000 workers in the U.S. solar panel industry will be out of a job.

What will remain will be the big corporations circling the debt-laden companies like vultures, buying their assets on the cheap.

What has not been factored into the solar sector equation: What will the U.S. and global economies look like in the autumn? If a crash comes, will the solar industry be wiped out?

Is this Joe Biden’s “Build Back Better” program at work?

On May 3, PV Magazine noted that “solar generation” is up 36 percent in the first quarter of 2022. That is a giant leap from a year before when weighing factors like COVID-19 mandates, lockdowns, and political turmoil.

The key passage from the article:

“Small-scale generation projects, which are projects less than 1 MW, were estimated to provide 50,301 GWh on a 12-month rolling basis, up 19% from the previous year’s rolling 12-month generation of 42,257 GWh. This generation level means that small-scale solar projects have now eclipsed 1% of total generation throughout the year at 1.2%.”

Yes, small-scale generation projects have surged by nearly 20 percent from last year. But that can be attributed to mainly the exodus of American people from blue cities and states, desperate to get out of the system, and build “off-grid” homes and communities.

Prior to COVID-19, the off-grid movement’s growth trended upwards. Then in the wake of the lockdowns, it exploded off the charts with mass migrations across states’ lines. Since then, the necessity to protect their families and lives has driven people into a mass exodus from West Coast and the Northeast to freer states.

Like houses connected to the grid, however, basic infrastructure is needed to succeed and survive in off-grid living. They include generating your power and access to clean water. Food, of course, is a critical component. But shelter, water, and power rule the day.

Speaking with an off-grid builder out West, he said, “All the political theater on activating the Defense Production Act for the solar panel industry now will kill the smaller companies anyway. They have employees to pay, mortgages, bank debt, and more. New panels won’t arrive until the fall. They cannot wait. They cannot survive.”

Pausing, he raised his voice in anger: “It will take six months for any new solar panels to be shipped to the U.S. By then, the logistics environment for trucking will be far worse than it is today… They [Dept. of Commerce] should never have shutdown overseas manufacturing of solar panels.”

In his view, the Biden regime is executing a two-for-one assault on the industry and American people. First, bankrupt the smaller companies, then punch down to the new off-grid builders preventing them from generating their self-sufficient power.

John D. Rockefeller, the oil king and godfather of the synthetic pharmaceutical industry, once said: “Competition is a sin.”

In today’s world of concentrated power and Big Tech gatekeppers, the oligarchs, such as Bill Gates and Jeff Bezos, know a great deal about crushing competitors. By leveraging the help of Big Government, the globalists will attempt to kill off the resisters and implement their one-world government scheme.

The Davos elites are carrying out their 2030 Agenda by cutting off food and energy to those who choose to live outside of the globalists’ system.

As we know, food and energy are not calculated in the U.S. core inflation index.

“No food, no power,” The off-grid builder said. “That this is how they will control the people. This is pure evil.”

He recalled a saying from his college professor: “One time is no time—nothing to worry about. Two times is one time too many. Three times is a mathematical pattern.”

For him, the trend lines of the domestic destruction carried out by the Biden regime in Washington, DC, are “so obvious” that mainstream media should be reporting it by now. But they are not—not until their lives are directly impacted.

And that is coming very soon. 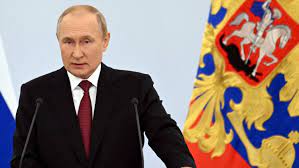